Words
JournalismNovelsPerformancesPeriodicals and AnthologiesPlays
About
Now
back
Taches de naissance 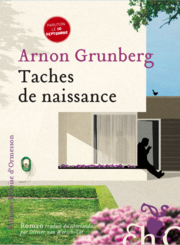