A friend of my parents 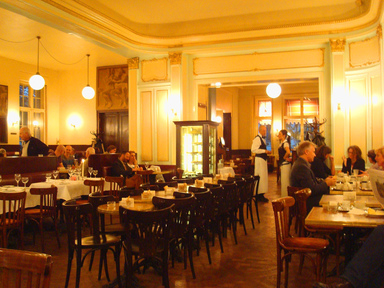 When I was eighteen or nineteen (I cannot remember exactly) I went to Berlin to audition for a theater school.
I stayed at a friend of my parents, a lovely lady with a beautiful apartment near the Kurfürstendamm.
On the day of the audition I took the subway to the theater school. Two stations before the school I got out of the subway and I took a taxi to café Einstein where I ordered a coffee.
I was supposed to audition at 11:00; it was now 10:45. I imagined that my name was called and nobody would answer. A feeling of both despair and happiness came over me and I ordered a second coffee.
Since that day I have been back to café Einstein in the Kurfürstenstraße in Berlin a couple of times; last night for example but also in the spring of 2005 with my friend Sigi from Vienna and a Dutch television crew. We were on our way to Auschwitz.