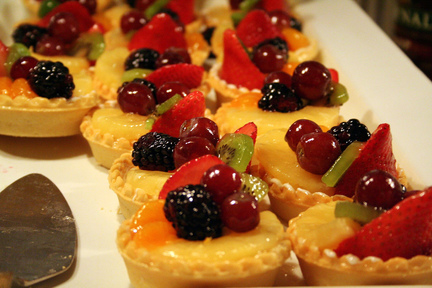 Last night the EU ambassador to Russia, a charming man from Belgium, threw a party in honor of the authors from the EU visiting the International Book Festival. This festival is by far the most Dadaistic festival I have ever been to, but that’s another story.
Last night the ambassador of the EU said: “Putin needs a lot of TLC.”

There was a buffet, but the host had already finished eating.

“Sarkozy asked Putin in a very colloquial way: ‘You have a girlfriend haven’t you?’ And Putin answered: ‘The woman you are referring to is a gymnast,’” the ambassador said.

Then the ambassador said: “It’s not a question if Barroso will be elected for a second term as President of the European Commission, the question is when this will happen, next week or in October. Sarkozy would like to delay it till October. That’s better, because Ireland will vote again on the treaty of Lisbon, and if the treaty is accepted there are few more high positions to divide between the member states.”

The ambassador made a few remarks about the disastrous Czech presidency of the EU. And then he walked away.

He appeared to be a happy man.