My body was free 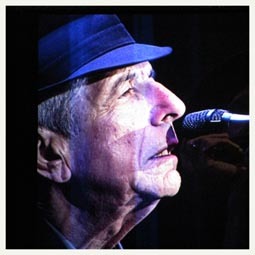 A charming piece in this week’s New Yorker about Leonard Cohen: ‘Cohen began his musical career suspended between song and speech. In 1967, “Songs of Leonard Cohen” introduced listeners to Cohen’s strong nasal tenor, which suited the casual roué he conjured on songs like “Suzanne” and “So Long, Marianne.” The production is spare: mostly acoustic instruments and, at Cohen’s request, no drums. Though he is working in Bob Dylan’s shadow, his manner is more relaxed and his visions are slightly less gnomic: “I lit a thin green candle, to make you jealous of me. But the room just filled up with mosquitoes—they heard that my body was free,” he sings, in “One of Us Cannot Be Wrong.”’

This is my favorite part of the article: ‘There is a telling moment at the end of “Ladies and Gentlemen . . . Mr. Leonard Cohen.” Throughout the film, Cohen is shown practicing the moves that he will later perfect in his songs—finding transcendence in the mundane and silly stations of ordinary days. We see him writing at a desk in a cheap hotel room, and enjoying the “particular glow that a hostile crowd emits” at a favorite hangout, a Montreal bistro where he has inscribed his poem “Marita” on the wall. (“Marita / Please find me / I am almost thirty.”)’

And this is the essential prayer: “Marita/ Please find me/ I am almost thirty.”

All other prayers are footnotes and allusions to this one.