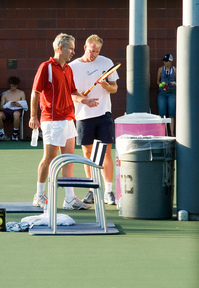 While waiting in line for coffee at the Angelika Film Center a woman overheard a conversation I was having with a friend.
“You're going to Paris?” the woman said to my friend. “I just got back from Paris. I had a date with a pop star. It was intense, you know how pop stars are.”

“Actually I don’t,” my friend said.

“We share a love for literature,” the woman said, “we both adore David Sedaris, the pop star and I, but at the end he was too British. You know, very polite but quiet.”

Later I asked my friend: “Do you really believe this woman had a date with a pop star?”

“I don’t. Tomorrow she will stand in line and she will say to a stranger: 'You're going to Berlin? I just got back from Berlin. I had a date with a tennis player. It was so intense. You know how tennis players are.'”