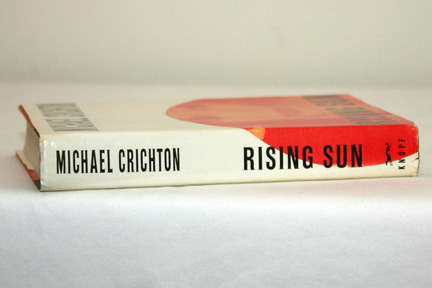 Since September 2005 I write blogs on a regular basis for Words Without Borders. For some reason a few editors at Words Without Borders didn’t like one of my last blogs, so they decided not to post it.
I’ll post it here. It might be a good idea if frequent readers spread this small essay to their friends and family. More people should know about “the small penis rule.” Well, I’ll start:

I apologize for writing again about penises for the third week in a row. This was not planned and I urge readers not jump to conclusions about my hang-ups, frustrations or hobbies. This time the author Michael Crichton is to blame.
According to a small article in the New York Times that is easily overlooked Michael Crichton is accused of “literary hit-and-run.” There is no connection to the penis yet, but wait.
A certain Mr. Crowley who appears in Mr. Crichton’s last novel “State of Fear” as a rapist (The New York Times did go into details I prefer not to) does exist in real life, of course not as a rapist but as a journalist who was in the past critical of Mr. Crichton.
This is all not very interesting. Just one more reason not to read Mr. Crichton’s work.
But wait, I’ll quote for you from the article in the NY Times: ‘Mr. Crowley contends that Mr. Crichton has tried to escape public censure for his literary attack by hiding behind what has become known as “the small penis rule.”’ Just out of sheer curiosity, how many of you have heard of the “small penis rule”? In case you have not, (for me this rule was something completely new, I would even say refreshing) here comes the explanation: ‘The rule, Mr. Crowley writes, is described in a 1998 article in The New York Times in which the libel lawyer Leon Friedman said it is a trick used by authors who have defamed someone to discourage lawsuits. “No male is going to come forward and say, ‘That character with a very small penis — that’s me!’ ” Mr. Friedman explained.” Enough, I would say, enough literary hit-and-run. I want the world to know that whenever a character with a small penis is found in a novel (not written by myself) it’s me.
Enough is enough. Let at least one male come forward and say it loud and clear.
As Ronald Reagan said: “Tear that wall down, Mr. Gorbachev” I say: “Tear that penis down, Mr. Crichton.” Or whichever author is trying to defame a male by using the small penis rule.