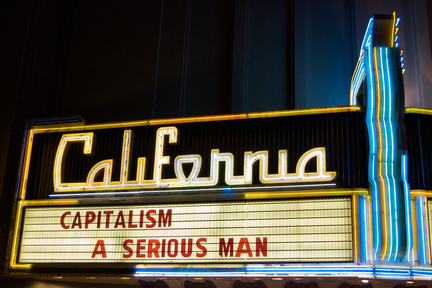 David Denby is a bit harsh on “A Serious Man”, the latest Coen brothers movie: ‘At the conclusion of their new movie, “A Serious Man,” the Coen brothers pull off a neat little joke. The picture is devoted to the travails of an unhappy Midwestern Jewish family—a real menagerie—in the sixties, and, in the end titles, the Coens have inserted, after the names of hardworking laboratories, the words “No Jews were harmed in the making of this motion picture.” Very good; first rate, in fact. But I’m not sure it’s true. I know of at least two Jews who were harmed—Ethan and Joel Coen. “A Serious Man,” like “Burn After Reading,” is in their bleak, black, belittling mode, and it’s hell to sit through.’

I don’t think that the Coen brothers are in their belittling mode.

The main character of “A Serious Man” is a physicist at a university who gets punished by God, and his wife, for no good reason.

God likes to punish the innocent. It’s mean to blame the Coen brothers for God’s hobbies.