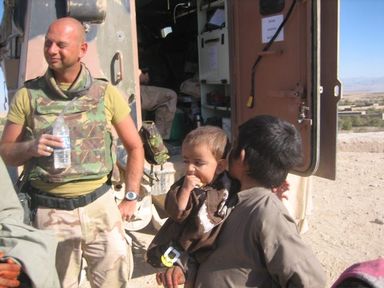 After my first visit to the Dutch army in Afghanistan (summer 2006) a Dutch newspaper and the Ministry of Defense asked me to help soldiers write about their experiences in Afghanistan.
Today the book with stories by soldiers, including a letter to his parents by a killed soldier, was published.
I thought of an article I wrote several weeks ago about the war photographer Ad van Denderen: “Wars are begun because the lust for war exists. After that, reasons are devised, exigencies and all manner of geopolitical interests thought up - none of which I have any desire to run down, but which are of little interest to me. I leave those discussions to the ladies and gentlemen of the op-ed pages who, after reviewing various foreign newspapers and magazines, are deemed able to put in their own two-cents’ worth.” (Translation: Sam Garrett)