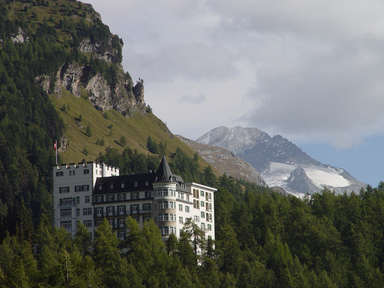 This morning around 09:30 the yearly outing for my employees (sometimes I think of them as my beloved slaves) started at Zurich Main Station.
We are with seven people, including an intern and "the boss".
After last year’s outing that consisted mainly of playing table tennis and eating Dutch pancakes (“poffertjes”) I decided to organize something more elaborate in 2010.
We will stay for three days in the beautiful Waldhaus Hotel in Sils-Maria.
This afternoon we had lunch in the dining car on the train between Chur and St. Moritz.
In the early evening some of my workers decided to visit the Nietzsche Museum in Sils-Maria.
Before dinner we went for a swim, and one of my workers was kind and competitive enough to organize a swimming competition. (I ended 2nd in the 40 m breaststroke, the intern beat me. After the contest I felt close to a heart attack.)
After dinner we discussed the future and we played foosball till 1:15 in the morning.