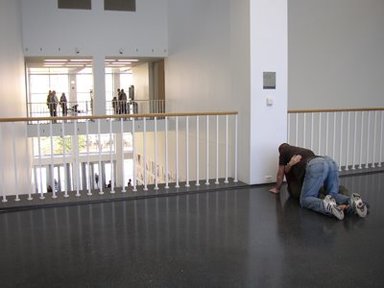 Arthur Lubow wrote an article about the artist Tino Sehgal in NYT Magazine: “I first encountered Tino Sehgal’s work under ideal conditions: total ignorance. Happening to be in Berlin in 2006 at the time of the city’s art biennial, I heard from an art-dealer friend that there was one exhibition not to miss. “I won’t tell you anything more,” he said, as he walked me to the site and bid me farewell. I trod up a creaking staircase in a building from the turn of the last century and entered a decayed ballroom, its ornate moldings and gilt mirrors testifying to a more glorious past. Lying on the floor, a man and a woman, fully dressed, were embracing languidly. There was no one else in the room. My presence went unacknowledged. In a state of mounting confusion and embarrassment, I stayed until I could stand it no longer, and then I retreated down the staircase. Out on the street, I sighed with relief, because I once again knew where I was.
Had I remained longer, I might have recognized that the two were re-enacting the curved-arm caressing gesture of Rodin’s marble statue “The Kiss,” as well as poses from other osculatory works, some less widely known but in their own way iconic, like Jeff Koons’s ceramic sculpture series “Made in Heaven.” And eventually I would have heard one member of the intertwined couple speak these words: “Tino Sehgal. ‘Kiss.’ 2002.” But I didn’t need that information for the piece to linger in my memory and arouse my curiosity.
I knew the name of the artist, and I watched for him. Although Sehgal was very busy, thriving in the incubation culture of art fairs and international exhibitions, he did not surface in New York until his inaugural show at the Marian Goodman Gallery in November 2007.”

Mr. Sehgal uses human beings instead of clay, paint, metal, video, film, photo or any readymade you can think of.

Mr. Lubow writes: 'In contrast, Sehgal is an absolutist. He does not allow his pieces to be photographed. They are not explained by wall labels or accompanied by catalogs. No press releases herald the openings of his exhibitions; indeed, there are no official openings, just unceremonious start dates. All of this can engender skepticism, but the aspect of Sehgal’s work that his detractors find most irritating is the way the art is sold. First of all, there is the fact that it is sold, just as if it were made of, say, cast bronze: in editions of four to six (with Sehgal retaining an additional “artist’s proof”) at prices between $85,000 and $145,000 apiece. Unlike some of his Conceptualist predecessors, Sehgal is totally unapologetic about the fact that his work is commercially traded. “The market is something you can’t be outside of and you can’t want to be outside of, if you are doing anything specialized,” he told an audience last May at the Museum of Modern Art, which bought “Kiss” in 2008 in a transaction that the museum’s director, Glenn Lowry, deemed “one of the most elaborate and difficult acquisitions we have ever made."'

It’s tempting, even for an author, to work with human beings. No more words, just flesh, blood and bones.