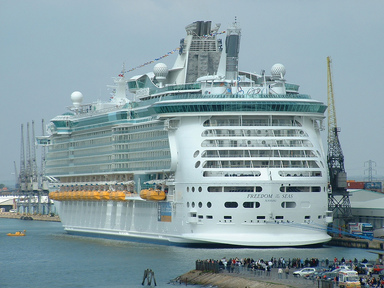 A friend alerted me to this article in The Guardian: 'Sixty miles from Haiti's devastated earthquake zone, luxury liners dock at private beaches where passengers enjoy jetski rides, parasailing and rum cocktails delivered to their hammocks.
The 4,370-berth Independence of the Seas, owned by Royal Caribbean International, disembarked at the heavily guarded resort of Labadee on the north coast on Friday; a second cruise ship, the 3,100-passenger Navigator of the Seas is due to dock.
The Florida cruise company leases a picturesque wooded peninsula and its five pristine beaches from the government for passengers to "cut loose" with watersports, barbecues, and shopping for trinkets at a craft market before returning on board before dusk. Safety is guaranteed by armed guards at the gate.
The decision to go ahead with the visit has divided passengers. The ships carry some food aid, and the cruise line has pledged to donate all proceeds from the visit to help stricken Haitians. But many passengers will stay aboard when they dock; one said he was "sickened".
"I just can't see myself sunning on the beach, playing in the water, eating a barbecue, and enjoying a cocktail while [in Port-au-Prince] there are tens of thousands of dead people being piled up on the streets, with the survivors stunned and looking for food and water," one passenger wrote on the Cruise Critic internet forum.
"It was hard enough to sit and eat a picnic lunch at Labadee before the quake, knowing how many Haitians were starving," said another. "I can't imagine having to choke down a burger there now.'' Some booked on ships scheduled to stop at Labadee are afraid that desperate people might breach the resort's 12ft high fences to get food and drink, but others seemed determined to enjoy their holiday."I'll be there on Tuesday and I plan on enjoying my zip line excursion as well as the time on the beach," said one.
The company said the question of whether to "deliver a vacation experience so close to the epicentre of an earthquake" had been subject to considerable internal debate before it decided to include Haiti in its itineraries for the coming weeks.'

One could argue that this is abject and cynical.

But I say it’s wonderful – to have a nice holiday on a luxury cruise liner, while knowing that your boat carries “food aid” for the wretched of the world.

I’m all in favor of combining waterskiing with good deeds.