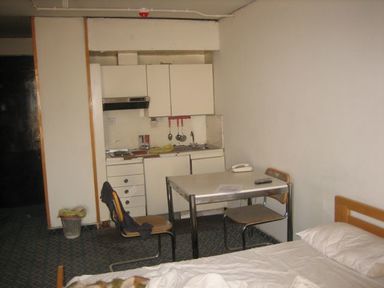 In March 2009 I stayed a week at the Al-Hamra Hotel in Baghdad.
Today a bomb exploded in front of the hotel, together with two other attacks elsewhere in the city.
The Times reports: ‘The highest toll, 16 dead and 33 wounded, was reported at the Hamra Hotel, situated in a densely populated but fortified neighborhood. At the hotel, a day laborer who gave his name as Abu Haider said he saw men in a car exchange gunshots at a checkpoint outside the compound, then watched a second car speed through.
“It was just seconds before the explosion,” he said.
The bomb left a crater about 12 feet wide and 6 feet deep about 50 feet from the hotel. It destroyed the house in front of the hotel, where rescue workers pulled bodies from the rubble. A woman who gave her name as Um Riyadh emerged from the ruined hulk of a house across the street from the Hamra, blood on her head and face.
“We lost the house,” she said, crying. “We lost everything. Why should I stay in Iraq? I’m going to leave. There’s no other solution.”’

My travel plans include a return to Iraq and I don’t think I will change my itinerary.

The Al-Hamra is a fine hotel. Don’t expect too much when it comes to food though.