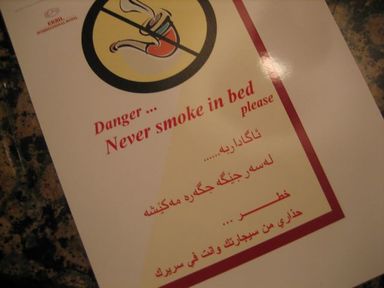 This warning on my nightstand makes clear where the danger is coming from in Arbil: smoking in bed.
In the meantime The Associated Press reports that the fight for Kirkuk is far from over: “Moreover, results so far have shown that the Kurdish Alliance, composed of the PUK and the other main Kurdish political party, is narrowly losing to Iraqiya in the key Tamim province in the north. The province is home to the oil-rich city of Kirkuk, which is claimed by both Arabs and Kurds. A win for Iraqiya would be a blow for Kurdish claims on the city.”

Tomorrow I will be traveling to Kirkuk.