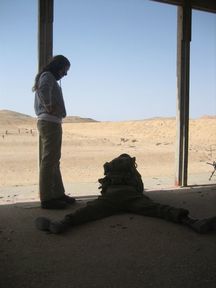 An interesting article in The Times of London: ‘Israel has placed a former soldier under house arrest for allegedly leaking details of a controversial policy to kill wanted Palestinian militants, and has slapped a gagging order on the national media to prevent it from covering the story, according to sources in the Jewish state and abroad.
The moves are being challenged by the media in a country that prides itself on its freedom of speech. An appeal is expected to be lodged this month by a television news channel and by the centre-left newspaper Haaretz, while the mass-market daily Maariv has satirised both the gag and the lack of media defiance by declaring: “Due to a gag order we cannot tell you what we know. Due to laziness, apathy and blind faith in the defence establishment we know nothing at all.”’

Neither the leak nor the arrest is exceptional, but a gag order should not be easily tolerated.
Of course, in many countries in the Middle East and elsewhere a gag order would not have been necessary because the media are already under control of the state.
When it comes to the rights of a citizen versus the rights of the state one should always err on the side of the citizen.

Read here the NYT coverage of this story.