I am in love 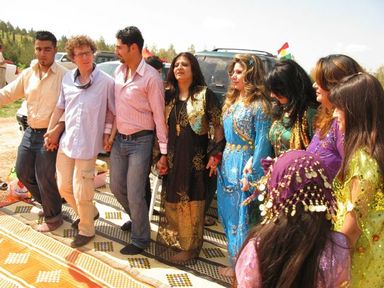 This article by Sam Dagher in yesterday’s Times is a reminder that Kurdish Iraq may be safe for its citizens and tourists, but only as long as you abstain from criticizing the ruling families:

‘A Kurdish journalist was kidnapped here in the capital of the semiautonomous Kurdistan region of Iraq, tortured and then found dead with two bullets in the head on a highway, his family and members of the security forces said on Thursday.
The family and friends of the journalist, Zardasht Osman, 23, said he was killed because of his scathing articles about the region’s two governing parties and its leaders, including the dominant Barzani family. Mr. Osman was a university student who freelanced for a number of publications and often wrote on the Internet under a pseudonym.
“I am in love with Barzani’s daughter,” read a satirical and irreverent Web post by Mr. Osman in December, which appeared to violate a taboo in the region’s deeply conservative and clan-based culture by referring to a female family member of the region’s president, Massoud Barzani. Mr. Osman mused about how he could rise from his poor surroundings by marrying one of Mr. Barzani’s daughters.’

Those who are saying that the northern part of Iraq has become a police state are right I’m afraid.
Despite this article in the Times Zardasht Osman will probably turn out to be an unworthy victim.