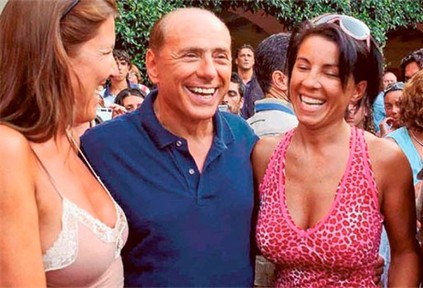 In yesterday’s Herald Tribune Rachel Donadio writes: ‘In Italy, you’re nobody if your phone isn’t tapped. Or, as Beppe Grillo, Italy’s leading political provocateur and blogger, put it: “This is a nation where if you can’t be blackmailed, you’ll never get ahead.” Wiretaps have captured showgirls and Mafiosi, politicians and loosely defined “masseuses,” and recently even a Vatican choir singer procuring seminarians for trysts with a male public works official.
Even Prime Minister Silvio Berlusconi routinely turns up in the wiretaps that are leaked to the Italian press with alarming regularity, usually in a supporting role, swept up in an investigation of someone else, but sometimes as the subject of the investigation himself. In 2007, he was caught on the phone with a television executive calling a member of his center-right coalition “a jerk” and asking the executive to meet with a showgirl.
He is apparently not pleased.’

To be somebody is a dreadful thing, but a wiretap on your phone is probably a low price to pay for the fulfillment of this desire.