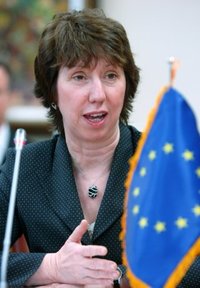 From the department of languages: ‘Some in Brussels have expressed sympathy for Ms. Ashton, who took over two functions when she got her job last year. Her predecessor as Britain’s representative at the European Commission, Peter Mandelson, did not speak French. The man she succeeded as European foreign policy chief, Javier Solana, spoke English and French, but with a heavy accent, as well as his native Spanish.
Meanwhile Mr. Buzek, the president of the European Parliament, will not be going back to school.
“He is a very busy man,” said his spokesman, Robert Golanski, “and therefore as long as he is President of the European Parliament it is unlikely he will be able to find additional time for learning French.” “He speaks very good English,” Mr. Golanski said, “and in addition to his native Polish he is able to speak Czech and Slovak.” As the French might put it, touché.’

I suggest we treat politics as an extension of summer language schools.