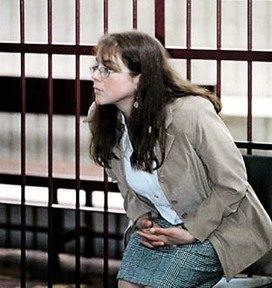 Simon Romero writes in the Times: “A Peruvian court said Wednesday that it had struck down a decision granting parole to Lori Berenson, the New Yorker imprisoned in the 1990s on charges of collaborating with a Marxist revolutionary group. The court ordered her to be returned to prison to complete the five years left in her 20-year sentence.
The decision was an abrupt turnabout for Ms. Berenson, 40, who turned herself in after the announcement, according to the United States Embassy in Lima, Peru’s capital.
After 14 and a half years in Peruvian prisons, including time spent in isolation in high-altitude Andean facilities, Ms. Berenson was released on parole in May when a judge decided that she had exhibited good behavior during her incarceration.”

“Beyond the court’s official reasoning, it was also clear that broad resentment over the release of Ms. Berenson — who is widely viewed in Peru as a symbol of the insurgents and the war against them that cost nearly 70,000 lives between 1980 and 2000 — influenced the decision.”

Twice I visited Lori Berenson in her prison in Cajamarca. I wrote about these visits in the Dutch newspaper NRC Handelsblad. These articles have also been published in my collection of journalistic pieces “Chambermaids and Soldiers”.