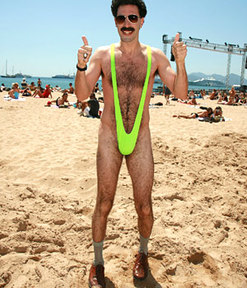 Time doesn’t heal all wounds.
Four years after the movie “Borat: Cultural Learnings of America for Make Benefit Glorious Nation of Kazakhstan” came out, some people in Kazakhstan are plotting a revenge.
In today’s Times Clifford J Levy writes:

‘Sitting before some editing banks on the second floor of a nightclub here, a Kazakh director named Erkin Rakishev described the weighty task ahead: defending the honor of all Kazakhs by wreaking revenge on the odious movie “Borat.” Even now, four years after the film left the multiplexes, people here still bristle at Sacha Baron Cohen’s portrayal of a buffoonish television reporter from Kazakhstan named Borat Sagdiyev, who has various misadventures in the United States and at home. The film was — and still is — considered an affront to the Kazakh national character. (Even its full name — “Borat: Cultural Learnings of America for Make Benefit Glorious Nation of Kazakhstan” — was unflattering.)
“I want to show modern Kazakhstan, as it is in reality,” Mr. Rakishev said. “After the original film, everyone around the world started mocking the Kazakh people. We were made to look crazy, wild, barbarous. It was not the truth.” Mr. Rakishev was certainly right. Kazakhstan, a vast former Soviet republic in Central Asia with a vibrant economy driven by oil and other natural resources, bears almost no resemblance to the place caricatured in Mr. Baron Cohen’s film.
So, would Mr. Rakishev’s retort be a documentary that extolled prosperous Kazakh cities like Almaty, the commercial capital, with its megamalls, coffee bars and boutiques selling the latest Parisian labels? Would it be a polemic that denounced Western imperialism for using cinema to undermine emerging nations like Kazakhstan? Not exactly. Coming soon to theaters near you (all right, mostly Kazakh ones): “My Brother, Borat,” a film that seeks to portray today’s Kazakhstan with some curious narrative devices. Like an amorous donkey. Which somehow has its way with Borat’s loopy brother. Who then gets pregnant. And the two get married.
Remind us again how this is supposed to improve the image of Kazakhstan? “It’s a black comedy,” Mr. Rakishev said. “If we do a comedy for the Kazakh people, in the West, they may not understand it. In Kazakhstan, they understand a donkey.”’

I’m not from Kazakhstan, but I claim that I understand a donkey as well.
I guess it’s time for me to go among the people in Kazakhstan.