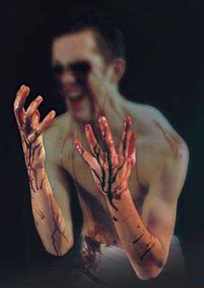 On October 8th I flew from New York to Frankfurt.
On the plane I read Coetzee’s review on Roth’s novel “Nemesis”.
Probably I had read too fast – yesterday a friend alerted me to the fact that Coetzee makes some insightful remarks about our tragic imagination in this review: ‘Since he wittingly did no wrong, Oedipus is not a criminal. Nevertheless, his actions—parricide, incest—pollute him and pollute whatever he touches. He must leave the city. “No man but I can bear my evil doom,” he says (David Grene’s translation). Bucky has likewise committed no crime. Yet even more literally than Oedipus, he is polluted. He too accepts his guilt and, in his own manner, takes the lonely road of exile.
At the core of the Oedipus fable, and of the archaic Greek worldview enshrined in it, lies a question foreign to the modern, post-tragic imagination. How does the logic of justice work when vast universal forces intersect the trajectories of individual human lives? In particular, what is to be learned from the fate of a man who unwittingly carried out the prophecy that he would kill his father and marry his mother, a man who did not see until he was blind? To respond that for one man to unwittingly (“by accident”) kill his own father and then unwittingly (“by chance”) marry his own mother is so statistically rare a sequence of events—even rarer than bearing the plague while seeming healthy—that it can hold no general lesson, or, to put it another way, that the laws of the universe are probabilistic in nature, not to be disconfirmed by a single aberrant individual case—to respond in this way would to Sophocles seem like evading the question. Such a man lived: his name was Oedipus. He experienced such a fate. How should his fate be understood?’

This is an important question. What’s the meaning of tragedy in these days and time? While there is little feeling for a force that as Coetzee puts it “redistributes fortune downward toward the middle or middling, and is in that sense mean, mean-minded: unkind, ungenerous, unrelenting.”

I, for one, believe that I’m very conscious about the sin of hubris. But this consciousness also tells me that it’s very well possible that I’m blind to the true extent of my own sins.