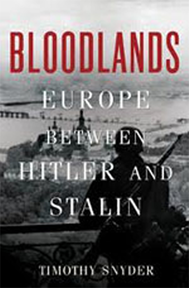 Neal Ascherson reviewed Timothy Snyder’s book “Bloodlands” in The Guardian: ‘His subject is the deliberate mass murder of civilians – Jewish and non-Jewish – in a particular zone of Europe in a particular time-frame.
The time is between about 1930 – the start of the second Ukraine famine – and 1945. The zone is the territory that lies between central Poland and, roughly, the Russian border, covering eastern Poland, Ukraine, Belarus and the Baltic republics. Snyder's "Bloodlands" label is jarring, a title those beautiful lands and those who now live there do not deserve. But it's true that in those years and in those places, the unimaginable total of 14 million innocent human beings, most of them women and children, were shot, gassed or intentionally starved to death.
Snyder's third aim is to correct, radically, the way we remember what happened. To start with, the public in western countries still tends to associate mass killing with "Nazi concentration camps", and with Auschwitz in particular. Stalin is thought to have killed far more people than the Nazis by consigning millions to the gulag. But neither assumption is accurate.
In the Soviet Union, it now appears that, although about a million men and women perished in the labour camps, nine out of 10 gulag prisoners survived. Stalin's great killing took place not in Siberia, but in the western Soviet republics, above all in Ukraine where in the 30s at least four million people died in man-made famines and in the slaughter of the "kulak" peasantry.
In the concentration camps of the Third Reich, a million prisoners died miserable deaths during the Nazi period. But 10 million others who never entered those camps were shot (mostly Jews), deliberately starved to death (mostly Soviet prisoners of war) or gassed in special "killing centres" which were not holding camps at all. At Auschwitz, the overwhelming majority of Jews were taken straight to the gas chambers on arrival. And Auschwitz, terrible as it was, formed a sort of coda to the Jewish Holocaust. By the time the main gas chambers came on line in 1943, most of Europe's Jewish victims were already dead.
Some – the Polish Jews especially – had been gassed in the three killing centres set up on Polish territory: Belzec, Sobibor and Treblinka. But most had been shot and pitched into mass graves by German police units operating far to the east in Ukraine, the Baltics and Belarus, the Einsatzgruppen who moved from village to village behind the front lines of war.’

A while ago I wrote on this site about an excellent article by Mr. Snyder in The New York Review of Books.