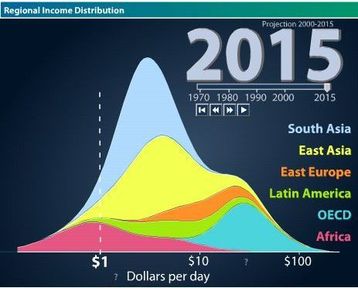 David Brooks alerted his readers to this interesting essay by Tyler Cowen on income inequality: “In terms of immediate political stability, there is less to the income inequality issue than meets the eye. Most analyses of income inequality neglect two major points. First, the inequality of personal well-being is sharply down over the past hundred years and perhaps over the past twenty years as well. Bill Gates is much, much richer than I am, yet it is not obvious that he is much happier if, indeed, he is happier at all. I have access to penicillin, air travel, good cheap food, the Internet and virtually all of the technical innovations that Gates does. Like the vast majority of Americans, I have access to some important new pharmaceuticals, such as statins to protect against heart disease. To be sure, Gates receives the very best care from the world’s top doctors, but our health outcomes are in the same ballpark. I don’t have a private jet or take luxury vacations, and—I think it is fair to say—my house is much smaller than his. I can’t meet with the world’s elite on demand. Still, by broad historical standards, what I share with Bill Gates is far more significant than what I don’t share with him.” (…)
“All that said, income inequality does matter—for both politics and the economy. To see how, we must distinguish between inequality itself and what causes it. But first let’s review the trends in more detail.
The numbers are clear: Income inequality has been rising in the United States, especially at the very top. The data show a big difference between two quite separate issues, namely income growth at the very top of the distribution and greater inequality throughout the distribution. The first trend is much more pronounced than the second, although the two are often confused.”

According to Cowen the financial industry is largely responsible for the raise in income inequality. But there is no remedy in sight.
The only comfort is that growing income inequality doesn’t necessarily mean growing happiness inequality: “Many studies suggest that above a certain level more money brings only marginal increments of happiness.”