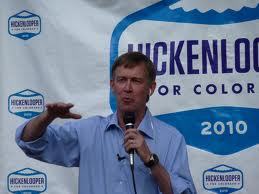 A friend alerted me to the this article in The New York Times Magazine by Frank Bruni about the governor-elect of Colorado, Mr. Hickenlooper: ‘Hickenlooper revels in his image as someone utterly estranged from fashion and largely devoid of physical vanity. It’s part of his outsider’s cred. At a mayoral candidates’ forum in 2003, he wore a glen-plaid jacket with a yellow shirt and a paisley tie, and a line he used repeatedly with reporters at the time was that if he managed to become mayor, he’d have to go out and buy a proper suit. In his closet, he told them, he didn’t have anything that qualified.
During his gubernatorial campaign, he sent out a fund-raising letter, which one of its recipients gave me, that showcased a picture of a very young man in very bulky eyeglasses and what appears to be a madras jacket. “I know this looks like an audition photo for the movie ‘Revenge of the Nerds,’ but it’s actually my senior high-school picture,” the letter begins. “Looking back, I had the whole world in front of me. I could have been destined for the big screen, maybe even a modeling career.” He’s kidding, of course, and like other instances of his gleeful self-mockery and buffoonery, it’s safe because there is so much countervailing evidence of polish and intelligence in him — because his haplessness is so obviously overstated. He’s 6-foot-1, slender, has a full head of economically cropped hair and doesn’t wear glasses anymore, thanks to Lasik surgery a dozen years ago.’

I cannot hide my sympathies for Mr. Hickenlooper.