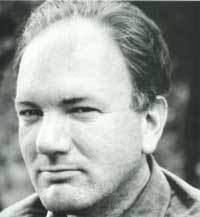 Adam Kirsch on Thomas Bernhard in the February 10 issue of the New York Review of Books: ‘What makes these anecdotes more than jokes Bernhard tells on himself is the way they enact, and subvert, the very philosophy of life that he expounds quite seriously in his fiction. Bernhard’s impulsive purchases are parodies of fateful decisions, carried out in the same spirit—arbitrary, ruthless, absolute—as any ethical or artistic project must be. The second volume of Bernhard’s autobiography, “The Cellar,” attributes the saving of his whole life to just such a spontaneous, seemingly reckless decision—when, as a teenager, he decided one morning not to go to school, which he despised, but to go to a labor exchange and get a job as a grocer’s apprentice instead.
“Such a moment is crucial for our survival; we simply have to pit ourselves against everything or quite simply cease to exist,” Bernhard writes. If the same kind of obstinacy sometimes leads to buying an unlivable house, or to making a commotion at an award ceremony, that does not mean it is ridiculous. Or perhaps it means that embracing the ridiculous, in himself and in the world, is what enabled Bernhard to tolerate the loneliness he both complained and boasted of.’

But “My Prizes: An Accounting” by Thomas Bernhard is a gem of a book.
Bernhard referred to his significant other as “my aunt”.
I decided to refer to my life partner as “my mother”.