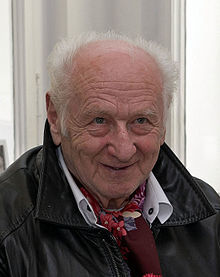 Dennis Hevesi writes in today’s Herald Tribune: “Arnost Lustig, an acclaimed Czech author who drew on his own harrowing experiences as a teenager in World War II to produce novels and short stories laced with tales of young people who survive the Holocaust, died on Feb. 26 in Prague. He was 84.
The embassy of the Czech Republic in Washington confirmed his death.
As a 15-year-old Jew, Mr. Lustig was sent in 1942 to Theresienstadt, the Nazi “show ghetto” in what is now the Czech Republic. Later he was transported to Auschwitz and then Buchenwald. In 1945 he escaped from a train carrying him to Dachau, when the engine was destroyed by an American fighter bomber.”

I contemplated publishing Mr. Lustig’s novel “A Prayer for Katerina Horovitzova” in Dutch translation when I owned a small publishing house in the early nineties.
During The Prague Writer’s Festival in 2007 I met Mr. Lustig at a party.
He talked with great knowledge about books, but he was particularly good at making ribald comments.
His love for literature and women was clearly undiminished.
I should have visited Mr. Lustig more often.