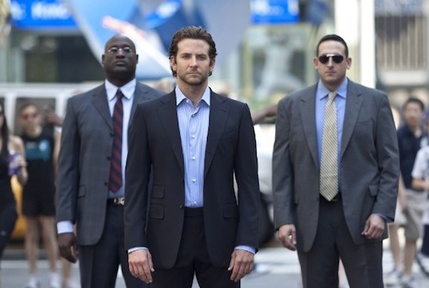 Last night I saw Neil Burger’s movie “Limitless”. A.O Scott’s review convinced me that “Limitless” was worth seeing: “Eddie’s fate, however, turns out to be a barbed and nasty joke, and at the last moment the film reveals itself to have been a seductively cynical, sharp-eyed comic fable for an age of greed and speed. It suggests that evolution has given us extraordinary brains, and that if someone could only take hold of this gift, there is no telling what he might do: engineer a corporate merger, run for political office, buy a huge apartment, order food at a restaurant in a foreign language.
Finish a piece of writing on deadline. Nothing would ever be the same.”

David Denby was a bit more critical in The New Yorker but alas: “Very limited, actually. (…) The movie seems to be another version of the Faust legend, but it’s played for action and for skewed visual perspectives (the hero races through the neon canyons of Times Square at maximum speed).”

The movie theater was nearly sold out – a surprise on a late Sunday night. Faust was nowhere to be found in this movie, the second surprise. And Eddie’s fate didn’t resemble a nasty joke, the third surprise. Of course, we all long for unlimited power. In the old days we thought that unlimited power could be found on the premises of the Department of Defense. Not anymore. If you look for unlimited power contact the closest pharmaceutical company to you. That’s what “Limitless” is telling the audience. And don’t forget to read the instruction leaflet.