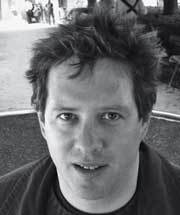 Tonight I participated in an event at The Invisible Dog Art Center in Brooklyn.
It was pouring rain; I decided to call a car service.
The driver asked me: “The Invisible Dog Center. That’s an hospital?”

“No,” I answered, “it’s an art center It's called The Invisible Dog Art Center.”

The event was part of a series of events called “Walls and Bridges” – organized by Villa Gillet.
Tonight’s event was labeled: “Overboard! An evening of music and storytelling.” The diversity of the performances was tremendous. Two performers limited themselves to an ironic, sadomasochistic scene.
The journalist David Samuels gave an insightful speech about the loss of religion, while eating a sandwich. He said that it was a BLT.
To him eating beacon emphasized the loss of religion.
I lost my religion as well, or to be more precise: I stopped practicing. But I still don’t eat bacon.
While listening to Mr. Samuels I asked myself: “Why don’t I eat bacon?” I guess for the same reason as why I would not make love to a prostitute without a condom. It’s just not worth the risk.
After the event there was a party.
A middle-aged man approached me with the words: “Can I ask you a question?”

“Of course,” I answered.

“What books would you recommend to a person who is learning Dutch? Besides your own books of course.”

It was still pouring rain, but it was time to go home. I had promised my girlfriend to not misbehave tonight. But to be honest, even if I had wanted to misbehave the Invisible Dog Art Center was not the place where this was going to happen, at least not tonight.
Unless of course you are willing to argue that a discussion about Dutch as a second language is misbehavior.