A literary club in prison 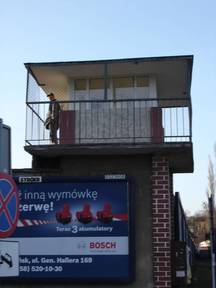 One of the highlights of my stay in Wroclaw – till now – was the visit to the prison of Wolow yesterday.
The director had a dry kind of humor, which was very appealing.

He told us about an inmate who tried to escape with a self-made parachute. The result was a broken leg.

The inmate is back in prison and renamed Spiderman.

The food in my opinion was not as good as at Guantánamo Bay.