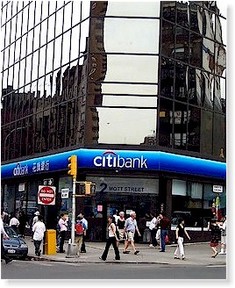 Paul Krugman and Robin Wells in The New York Review of Books:

‘Suppose we describe the following situation: major US financial institutions have badly overreached. They created and sold new financial instruments without understanding the risk. They poured money into dubious loans in pursuit of short-term profits, dismissing clear warnings that the borrowers might not be able to repay those loans. When things went bad, they turned to the government for help, relying on emergency aid and federal guarantees—thereby putting large amounts of taxpayer money at risk—in order to get by. And then, once the crisis was past, they went right back to denouncing big government, and resumed the very practices that created the crisis.
What year are we talking about? We could, of course, be talking about 2008–2009, when Citigroup, Bank of America, and other institutions teetered on the brink of collapse, and were saved only by huge infusions of taxpayer cash. The bankers have repaid that support by declaring piously that it’s time to stop “banker-bashing,” and complaining that President Obama’s (very) occasional mentions of Wall Street’s role in the crisis are hurting their feelings.
But we could also be talking about 1991, when the consequences of vast, loan-financed overbuilding of commercial real estate in the 1980s came home to roost, helping to cause the collapse of the junk-bond market and putting many banks—Citibank, in particular—at risk. Only the fact that bank deposits were federally insured averted a major crisis. Or we could be talking about 1982–1983, when reckless lending to Latin America ended in a severe debt crisis that put major banks such as, well, Citibank at risk, and only huge official lending to Mexico, Brazil, and other debtors held an even deeper crisis at bay. Or we could be talking about the near crisis caused by the bankruptcy of Penn Central in 1970, which put its lead banker, First National City—later renamed Citibank—on the edge; only emergency lending from the Federal Reserve averted disaster.’

Alas, all quiet on the Eastern Front.