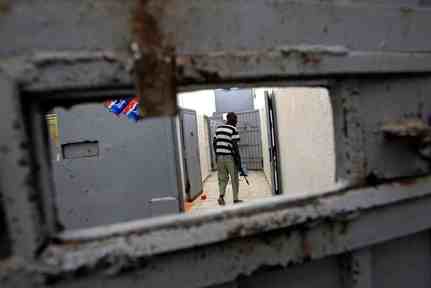 David D. Kirkpatrick in today’s Times: ‘As rebel leaders pleaded with their fighters to avoid taking revenge against “brother Libyans,” many rebels were turning their wrath against migrants from sub-Saharan Africa, imprisoning hundreds for the crime of fighting as “mercenaries” for Col. Muammar el-Qaddafi without any evidence except the color of their skin.’ (…)
‘Outside the migrants’ cage, a similar number of Libyan prisoners occupy a less crowded network of rooms. Osama el-Zawi, 40, a former customs officer in charge of the jail, said his officers had allowed most of the Libyan Qaddafi supporters from the area to go home. “We all know each other,” he said. “They don’t pose any kind of threat to us now. They are ashamed to go out in the streets.” But the “foreign fighters,” he said, were more dangerous. “Most of them deny they were doing it,” he said, “but we found some of them with weapons.” A guard chimed in: “If we release the mercenaries, the people in the street will hurt them.”’

Ah well, the good guys are not as good as we want them to be.

But it’s too early to be cynical about the Libyan civil war.