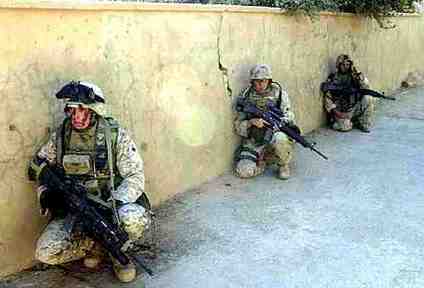 This article by Michael S. Schmidt that The New York Times published a couple of days ago is very much worth reading: “The 400 pages of interrogations, once closely guarded as secrets of war, were supposed to have been destroyed as the last American troops prepare to leave Iraq. Instead, they were discovered along with reams of other classified documents, including military maps showing helicopter routes and radar capabilities, by a reporter for The New York Times at a junkyard outside Baghdad. An attendant was burning them as fuel to cook a dinner of smoked carp.
The documents — many marked secret — form part of the military’s internal investigation, and confirm much of what happened at Haditha, a Euphrates River town where Marines killed 24 Iraqis, including a 76-year-old man in a wheelchair, women and children, some just toddlers.
Haditha became a defining moment of the war, helping cement an enduring Iraqi distrust of the United States and a resentment that not one Marine has been convicted.”

So far for secrecy: in Iraq classified papers can be found in the garbage. (If you are lucky you can find classified papers in other countries in the garbage as well.)
But of course the true conspiracy theorist will believe that the CIA left these papers on purpose at a junkyard outside Baghdad, in order to cause confusion behind enemy lines.

The true believer is a conspiracy theorist.