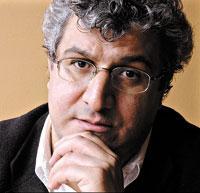 My friend Samir El-Youssef, with whom I once had a lovely discussion in Antwerp, is one of the founders of the Arab-Israeli Book Review.

El-Youssef writes: “Writers cannot forget texts that teach them something about their own writing. This story, published in Keret’s collection The Bus Driver who Wanted to Be God, taught me how to understand my own writing. I had just finished my novella The Day the Beast Got Thirsty, and wasn’t sure that it should sound as rebellious as it did when I first read it for myself.
Challenging what other Palestinian writers have been doing, or defying the national discourse, hasn’t been an infrequent intention of mine, but with The Day the Beast Got Thirsty, I wished to write something out of fun, out of love for certain characters, out of being influenced by several writers who move me such as Borges, Ibrahim Aslan, Victoria Tokariva, Raymond Carver, Emil Habiby, Mohammad Al-Abdullah and others.
Listening to Etgar reading a story about a bus driver who wanted to be God, in a country where many crowded buses have been blown up, taught me that there is a rich area of interest which writers shouldn’t miss, without necessarily having to be deliberately rebellious.
The national and political reality of the Palestinian-Israeli conflict monopolises all coverage and representation, but within this reality there is another reality, say a sub-reality, with practically no representation at all. This sub-reality includes not only the lives of the socially and culturally marginalised, but also the everyday reality of the whole society; the daily challenge of the recondite and constant struggle to fulfil various individual wishes.”

Take a look at the Arab-Israeli Book Review. It never hurts to approach the Palestinian-Israeli conflict with civilized detachment and a healthy sense of humor.