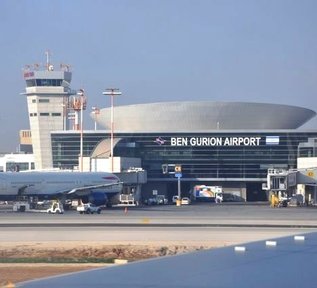 In today’s Herald Tribune: “I’m a Palestinian who was born in the Israeli town of Lod, and thus I am an Israeli citizen. My wife is not; she is a Palestinian from Nablus in the Israeli-occupied West Bank. Despite our towns being just 30 miles apart, we met almost 6,000 miles away in Massachusetts, where we attended neighboring colleges.
A series of walls, checkpoints, settlements and soldiers fill the 30-mile gap between our hometowns, making it more likely for us to have met on the other side of the planet than in our own backyard.
Never is this reality more profound than on our trips home from our current residence outside Washington.
Tel Aviv’s Ben-Gurion International Airport is on the outskirts of Lod (Lydda in Arabic), but because my wife has a Palestinian ID, she cannot fly there; she is relegated to flying to Amman, Jordan. If we plan a trip together — an enjoyable task for most couples — we must prepare for a logistical nightmare that reminds us of our profound inequality before the law at every turn.
Even if we fly together to Amman, we are forced to take different bridges, two hours apart, and endure often humiliating waiting and questioning just to cross into Israel and the West Bank. The laws conspire to separate us.”

Unfortunately the bureaucracy of the (Israeli) security system doesn’t treat its subjects equally.

Armed guerilla struggle against the state more often than not empowers the state to control its citizens and legitimizes abhorrent laws and measures. The real crimes of Sendero Luminoso were used by Fujimoro to legitimize state terrorism. To name just one example.

But above all, as Yousef Munayyer points out in his article, it’s about time that Israel acknowledges the Nakba.