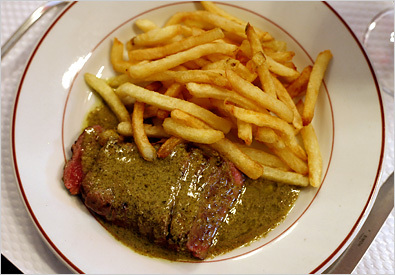 More on New York restaurants – nominated for best service: Le Relais de Venise.
And as Sam Sifton wrote in 2009 in The New York Times about Le Relais de Venise, which offers only salad, steak, fries, dessert and an alternative for vegetarians : “Le Relais de Venise did not flourish on the strength of its wine list, however. Lacking restaurant experience, M. Gineste de Saurs had limited ambition. He thought only to offer a salad to start, and then a grilled cut of sirloin the French call entrecôte (and which we call strip steak), with a rich, buttery sauce and a copious amount of fries.
He took no reservations; you simply showed up and were seated. Those decisions turned out brilliantly. They were an assault on the tyranny of choice.”

It’s good to remember that there is such a thing as the tyranny of choice, not only in restaurants, but also in the world at large.