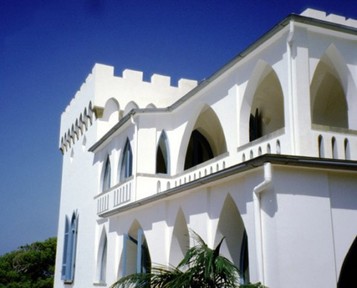 This morning I went to Forio, a small town on Ischia, where according to a tourist guide the villa of Luchino Visconti was turned into a small museum.
The villa appeared to be closed and slightly neglected as well.
But the taxi driver, a man in his fifties who didn’t speak a word of English, didn’t give up easily. He climbed on the wall and he managed to enter the premises illegally.
After five minutes he came back with an elderly woman who was the caretaker of the villa. She was escorted by a small, barking dog.
The museum was not only closed, the museum seemed to have disappeared. The lady spoke of vandalism. She showed us the tomb of Visconti in the woods of the villa that once must have been a garden; Visconti’s sister was also buried in the tomb.
The tomb wasn’t in good shape either. Somebody had left a plant on the tomb, but the plant must have died a couple of months ago.
If I understood the lady correctly she mumbled again that there was so much vandalism today and then she led us to the gate together with the small, barking dog.