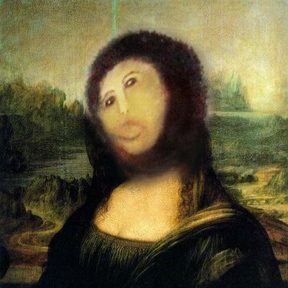 An interesting article by Raphael Minder in Friday’s Herald Tribune:

‘A case of suspected vandalism in a church in a northeastern village in Spain has turned out to be probably the worst art restoration project of all time.
An elderly woman stepped forward this week to claim responsibility for disfiguring a century-old “ecce homo” fresco of Jesus crowned with thorns, in Santuario de la Misericordia, a Roman Catholic church in Borja, near the city of Zaragoza.
Ecce homo, or behold the man, refers to an artistic motif that depicts Jesus, usually bound and with a crown of thorns, right before his crucifixion.
The woman, Cecilia Giménez, who is in her 80s, said on Spanish national television that she had tried to restore the fresco, which she called her favorite local representation of Jesus, because she was upset that parts of it had flaked off due to moisture on the church’s walls.’

So much for good intentions.

Perhaps this woman had also tried to restore her husband’s teeth.

Let’s hear it for consequentialism.