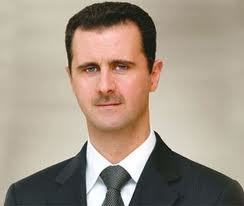 ‘From emails sent last year, purportedly to Syrian president Bashar al-Assad, by Lamis Omar, a Ph.D. student working as his translator. The emails were among hundreds recovered by WikiLeaks and released in July.
“It is my land by all means: legal, political, and national. Sooner or later, it has to go back.” The use of the phrasal verb “to go back” literally means “to return,” but its use depends on the subject of the sentence, the object, and the verb used. Look at the following examples. “Jews should go back to their country of origin.” “The Palestinians have to go back to their occupied land.” “Our land should come back to us.” A “muted statement” is a synonym of an “understatement,” which is defined as “an incomplete statement, representing something less strongly than what the facts would justify.” The Western media, whose content is unfortunately imported unrefined into our media, is very skilled in using “understatements” such as “war on terrorism” for “invasion.” (…)

Many Dutch (or American) politicians probably believe in the freedom that liberates the minds of the people.

I myself am a great believer in the liberation of the minds of the people.

Consumption is fighting for freedom.