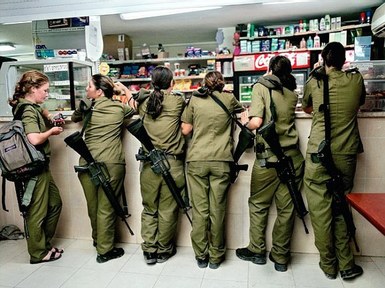 “During my first year of service, I spent about a week certifying agroup of religious soldiers on grenade launchers. On the second day I brought one to the classroom, so I could point to different parts as I was demonstrating how to use them. The moment I touched the weapon, one of the soldiers got up from his chair and left. Soon, the room was filled with the sound of scraping chairs. I proceeded with my lesson plan until I was left alone with one bespectacled soldier, who had been furiously taking notes. It was only when I stopped talking that he looked up, horrified to find that the two of us were alone.
My commander later explained to me that while these particular religious soldiers had no problem being instructed by a woman holding erasable markers and pointing at posters, their doctrine prevented them from seeing a woman touch a weapon. Something to do with a line written somewhere that mentioned women and instruments of war and said the two didn’t go together. I never heard of it before or after, and still don’t quite understand it.
AS a secular Jewish girl who never went to temple, I didn’t interact socially with Orthodox Jews when I was growing up. Everyone at school was like me; the few deeply religious families that lived in my small town sent their children to religious schools. When I visited cities like Tel Aviv or Jerusalem, the religious people I saw on the bus or on the street, dressed in black hats and jackets, seemed very far from anything I knew.”

Probably this is what a two-state solution should look like: