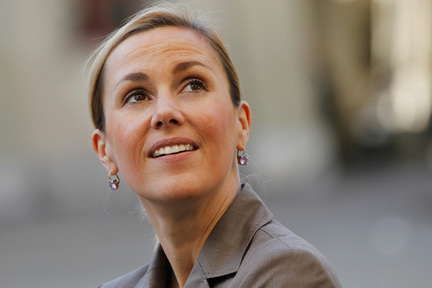 ‘In an earlier, more innocent era, the shocking rumors about the past of a former first lady of Germany would have stayed put in the drawing rooms of the political elite. Nowadays, they appear unbidden on Google.
Say a schoolchild writing a homework assignment about Bettina Wulff entered her name into the search engine. “Bettina Wulff prostitute,” Google’s autocomplete function would helpfully but perhaps slanderously suggest. “Bettina Wulff escort” would pop up for good measure.
“I was stunned,” Ms. Wulff, who vehemently denied the accusations, told the weekly newsmagazine Stern, one of several publications to feature her on the cover in recent weeks. “I felt powerless and cried a lot.” As a result, Ms. Wulff, whose husband resigned as president in February in the midst of a scandal over favors from wealthy friends, is now the leading player in a latter-day fable mixing gossip, sharp-elbowed politics and new technology. Taking an aggressive tack against the rumors, she filed a lawsuit against Google in a Hamburg court.
Her suit signals the latest effort to force the Internet giant to play the role of online referee, following close behind Google’s decision to block an inflammatory anti-Muslim video from YouTube in certain countries.
In Ms. Wulff’s case, Google has countered that it is not to blame for her troubles. “All of the queries shown in Autocomplete have been typed previously by other Google users,” Kay Oberbeck, a spokesman for the company, said in a statement that suggested it was the curiosity of the many, and not the assessment of the company, that was causing the offending terms to pop up.
Not content with litigation, Ms. Wulff has started a campaign to clear her name. Her newly published memoir became the best-selling nonfiction book in Germany this week.’

‘When the rumors spread on the Internet, Ms. Wulff kept quiet while her husband dealt with revelations that he had received a questionable personal loan when he was state premier, as well as the use of a car and other favors from wealthy friends. Mr. Wulff resigned, but the gossip about his wife did not go away.
Her publicity offensive may have done a better job of selling books than extinguishing the prostitution story. A representative survey by the polling group Emnid for the newspaper Bild am Sonntag found that 81 percent of Germans had never heard the rumors before she started her campaign to stop them.’

Silence is a superior weapon. Are you angry? Remain silent.