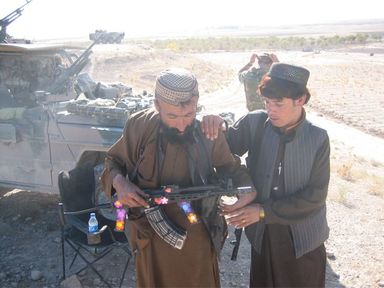 'The first thing Col. Akbar Stanikzai does when he interviews recruits for the Afghan National Army is take their cellphones.
He checks to see if the ringtones are Taliban campaign tunes, if the screen savers show the white Taliban flag on a black background, or if the phone memory includes any insurgent beheading videos.
Often enough they flunk that first test, but that hardly means they will not qualify to join their country’s manpower-hungry military. Now at its biggest size yet, 195,000 soldiers, the Afghan Army is so plagued with desertions and low re-enlistment rates that it has to replace a third of its entire force every year, officials say.
The attrition strikes at the core of America’s exit strategy in Afghanistan: to build an Afghan National Army that can take over the war and allow the United States and NATO forces to withdraw by the end of 2014. The urgency of that deadline has only grown as the pace of the troop pullout has become an issue in the American presidential campaign.
The Afghan deserters complain of corruption among their officers, poor food and equipment, indifferent medical care, Taliban intimidation of their families and, probably most troublingly, a lack of belief in the army’s ability to fight the insurgents after the American military withdraws.
On top of that, recruits now undergo tougher vetting because of concerns that enemy infiltration of the Afghan military is contributing to a wave of attacks on international forces.
Colonel Stanikzai, a senior official at the army’s National Recruiting Center, is on the front line of that effort; in the six months through September, he and his team of 17 interviewers have rejected 962 applicants, he said.
“There are drug traffickers who want to use our units for their business, enemy infiltrators who want to raise problems, jailbirds who can’t find any other job,” he said. During the same period, however, 30,000 applicants were approved.
“Recruitment, it’s like a machine,” he said. “If you stopped, it would collapse.”'

I wonder how NATO defines “success” in Afghanistan. I suppose that if NATO finds one decent human being in Afghanistan the war, according to NATO, would have been justified.

See also under: Sodom and Gomorrah.