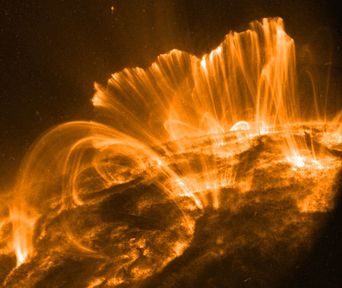 According to Yousaf Butt in Saturday’s Herald Tribune we should prepare for a solar storm:

‘Horrendous and damaging as it was, Hurricane Sandy would be considered only an opening act compared with a powerful “once-in-a-century” solar storm.
These storms of charged particles and magnetic fields are unleashed periodically by the Sun and — if headed toward Earth — can cause havoc with satellites and the electricity grid.
Unlike with Sandy, we are woefully underprepared both to detect such impending storms and to respond to them. Although they can come at any time, their likelihood waxes and wanes in 11-year cycles — with the next period of maximum activity being next year.

A powerful solar (or “geomagnetic”) storm has the potential to simultaneously damage multiple transformers in the electricity grid and perhaps even bring down large sections of it, affecting upwards of a hundred million people in the United States for many months, if not years.
These huge transformers are expensive and difficult to replace, and not many are stockpiled in the United States for an emergency. In the worst case, the impact would be devastating: An outage could cost a few trillion dollars, with full recovery taking years. Not only would parts of the grid be compromised, but telephone networks, undersea cables, satellites and railroads also would be affected.
A 2008 National Academy of Sciences study warned that “because of the interconnectedness of critical infrastructures in modern society,” the “collateral effects of a longer-term outage” would likely include “disruption of the transportation, communication, banking and finance systems, and government services; the breakdown of the distribution of potable water owing to pump failure; and the loss of perishable foods and medications because of lack of refrigeration.” Similarly, a recent Lloyd’s of London report cautioned that “a loss of power could lead to a cascade of operational failures that could leave society and the global economy severely disabled.”’

But then the big question is: how do you get to New Zealand in time?