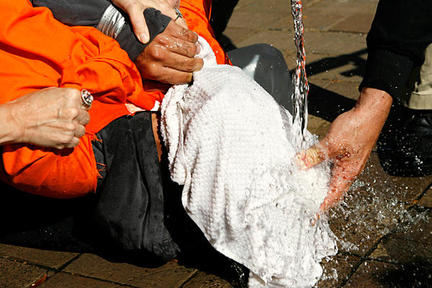 ‘A former Central Intelligence Agency officer was sentenced on Friday to 30 months in prison for disclosing the identity of a covert agency officer to a freelance writer, representing the first time that a C.I.A. officer will serve prison time for disclosing classified information to the news media.
The sentencing in federal court here of John C. Kiriakou, 48, who served as an agency analyst and counterterrorism officer from 1990 to 2004, was the latest development in the Obama administration’s unprecedented crackdown on government leaks.
At the sentencing hearing, the judge overseeing the case, Leonie M. Brinkema of Federal District Court, said she would respect the terms of a plea agreement between prosecutors and Mr. Kiriakou, which called for him to serve a 30-month sentence. But she said, “I think 30 months is way too light.” In October, Mr. Kiriakou pleaded guilty to one charge of violating the Intelligence Identities Protection Act when he disclosed to a reporter the name of an agency officer who had been involved in the C.I.A.’s program to hold and interrogate detainees.
Judge Brinkema said, “This is not a case of a whistle-blower.”’

‘Mr. Kiriakou had played a significant role in some of the C.I.A.’s major achievements after the attacks of Sept. 11, 2001. In March 2002, he led a group of agency and Pakistani security officers in a raid that captured Abu Zubaydah, who was suspected of being a high-level facilitator for Al Qaeda.
In 2007, three years after he left the C.I.A., Mr. Kiriakou discussed in an interview on ABC News the suffocation technique that was used in the interrogations known as waterboarding. He said it was torture and should no longer be used by the United States, but he defended the C.I.A. for using it in the effort to prevent attacks.
In subsequent e-mail exchanges with a freelance writer, Mr. Kiriakou disclosed the name of one of his former colleagues, who was still under cover and had been a part of the detention and interrogation program.’

Perhaps Mr. Kiriakou should not have disclosed the name of one of his former colleagues, but why exactly is this not a case of a whistle-blower? Or should we conclude that government can never engage in illicit activity?