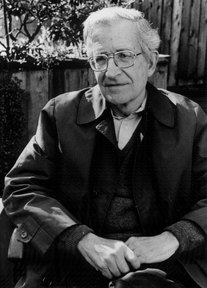 Perhaps it’s refreshing to quote Noam Chomsky for a change.

This is from an article on the site of Le Monde Diplomatique:

‘[This piece is adapted from “Uprisings,” a chapter in Power Systems: Conversations on Global Democratic Uprisings and the New Challenges to U.S. Empire, Noam Chomsky’s new interview book with David Barsamian (with thanks to the publisher, Metropolitan Books). The questions are Barsamian’s, the answers Chomsky’s.] Does the United States still have the same level of control over the energy resources of the Middle East as it once had? The major energy-producing countries are still firmly under the control of the Western-backed dictatorships. So, actually, the progress made by the Arab Spring is limited, but it’s not insignificant. The Western-controlled dictatorial system is eroding. In fact, it’s been eroding for some time. So, for example, if you go back 50 years, the energy resources — the main concern of U.S. planners — have been mostly nationalized. There are constantly attempts to reverse that, but they have not succeeded.
Take the U.S. invasion of Iraq, for example. To everyone except a dedicated ideologue, it was pretty obvious that we invaded Iraq not because of our love of democracy but because it’s maybe the second- or third-largest source of oil in the world, and is right in the middle of the major energy-producing region. You’re not supposed to say this. It’s considered a conspiracy theory.
The United States was seriously defeated in Iraq by Iraqi nationalism — mostly by nonviolent resistance. The United States could kill the insurgents, but they couldn’t deal with half a million people demonstrating in the streets. Step by step, Iraq was able to dismantle the controls put in place by the occupying forces. By November 2007, it was becoming pretty clear that it was going to be very hard to reach U.S. goals. And at that point, interestingly, those goals were explicitly stated. So in November 2007 the Bush II administration came out with an official declaration about what any future arrangement with Iraq would have to be. It had two major requirements: one, that the United States must be free to carry out combat operations from its military bases, which it will retain; and two, “encouraging the flow of foreign investments to Iraq, especially American investments.” In January 2008, Bush made this clear in one of his signing statements. A couple of months later, in the face of Iraqi resistance, the United States had to give that up. Control of Iraq is now disappearing before their eyes.
Iraq was an attempt to reinstitute by force something like the old system of control, but it was beaten back. In general, I think, U.S. policies remain constant, going back to the Second World War. But the capacity to implement them is declining.’

The decline of the American empire has been predicted since a long time already but I would say that the empire is pretty resilient, not in the last place because of weak and internally divided competitors.