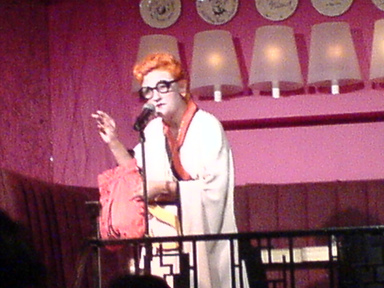 This afternoon I was on another panel at the PEN Festival in New York, this panel was called: “What’s So Funny? Humor Out of Context.” It’s not out of modesty that I don’t think that I'm very funny. There was a time when the laughter of the audience came as a relief, but I have learned to live with the silence and I have to say that I learned to appreciate the silence of the audience.
Laughter in other words is not my objective, which doesn’t mean that I know what my objective is.
Moderator of this panel was a rather beautiful woman named Victoria Roberts who does cartoons for the New Yorker, among other things.
For this panel she was disguised as one her characters named Nona Appleby.
I wonder if I should disguise myself more often as one of my characters but I do not have a very good make-up artist. This is the main reason why I come across as melancholic.
Mrs. Appleby asked us to describe our cultural background. I listed a few countries, didn’t mention that both my parents were Jewish and stated that I longed to die as an Italian, but of course I know that this is not going to happen. My best bet is still to die as a respectable citizen of New Zealand.
Mrs. Roberts and I have might have soon a coffee at my favorite Sant Ambroeus. In the coming weeks I’ll be on the lookout for a decent make-up artist, and hey if you feel like doing something for me: be on the lookout as well.