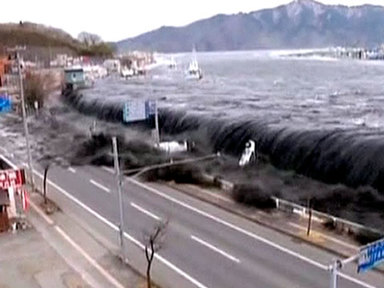 Tonight I went to the Japan society to listen to the pianist Tomoko Mukaiyama.
On the website of the Japan Society her piece “Nocturne” was described as: “Originally consisting of a live piano concert and a gallery installation comprising two pianos destroyed by the tsunami, Mukaiyama remounts this work, a sonic tapestry that seamlessly weaves music by Chopin and contemporary works by Rzewski, Sciarrino, Ligeti, Somei Satoh, with an original composition by Mukaiyama herself. Recorded samples of a children’s choir from the area of the tsunami singing school songs are threaded throughout, and the entire piece unfolds against striking video images captured from the devastated area.”

This sounds rather heavy-handed, but the music and the performance were surprisingly light. “Nocturne” had a hypnotic quality.

After the concert I went with a friend to a Japanese restaurant on 43rd street, Sakagura.
On the occasion of the 2nd “anniversary” of the earthquake in Japan Sakagura offered a special sake tasting menu, with sake from the areas affected by the tsunami.