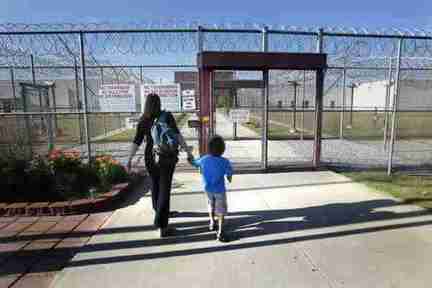 Compared to the US holding facilities for illegal immigrants, those in the Netherlands appear to be slightly more civilized.
Ian Urbina and Catherine Rentz report in the NY Times about the situation of immigrants in detention facilities in the US:

‘The United States has come under sharp criticism at home and abroad for relying on solitary confinement in its prisons more than any other democratic nation in the world. While Immigration and Customs Enforcement places only about 1 percent of its jailed immigrants in solitary, this practice is nonetheless startling because those detainees are being held on civil, not criminal, charges. As such, they are not supposed to be punished; they are simply confined to ensure that they appear for administrative hearings.
After federal immigration authorities caught up with him, Rashed BinRashed, an illegal arrival from Yemen, was sent to a detention center in Juneau, Wis. He was put in solitary confinement, he says, after declining to go to the jail’s eating area and refusing meals because he wanted to fast during Ramadan.’

‘Access to phones and lawyers is far more restricted in solitary; occasionally such communications were permitted only in the middle of the night when it was unlikely anyone would be available. Immigrants are typically given an hour or so of recreation each day, detainees said. In some facilities, that is limited to pacing in what detainees call “the cage,” a sparse indoor enclosure with concrete floors and fencing on all sides, similar to an indoor dog kennel.’

‘Solitary confinement is widely viewed as the most dangerous way to detain people, and roughly half of prison suicides occur when people are segregated in this way. Deprived of meaningful human contact, otherwise healthy prisoners often become deeply troubled. Paranoia, depression, memory loss and self-mutilation are not uncommon. No data is available on how many of the 18 suicides out of 133 deaths of detained immigrants since 2003 occurred in solitary units.
Dr. Allen Keller, the director of the New York University Center for Health and Human Rights, said that when he interviewed about 70 immigrant detainees a decade or so ago, roughly a quarter said they had been put in solitary at some point and about 40 percent said they had been threatened with it.
Trauma experts say the psychological impact of solitary may be more acute for immigrant detainees because many are victims of human trafficking, domestic violence or sexual assault or have survived persecution and torture in their home countries.
For example, Ronal Rojas-Castro, a Honduran immigrant, was detained for eight months after entering the United States illegally last April. He was caught after being held captive by smugglers for five days with more than 100 other people in a house in Texas near the Mexico border. When one of the immigrants managed to call for help, the immigration agency was alerted, and Mr. Rojas-Castro broke his ankle trying to run away.
He was later caught and put in solitary, he says, because guards said his crutches could be used as a weapon. Mr. Rojas-Castro was kept in complete darkness for four days, wearing only his underwear.’