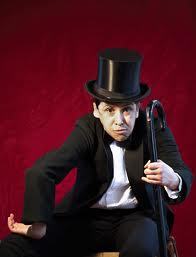 A friend alerted me to this play, "Kafka’s Monkey", based on the story “A Report for an Academy” by Kafka.
Kathryn Hunter as the ape who becomes something that resembles a human being is amazing.

(If I’m not mistaken the director, Walter Meierjohann, had adapted my novel “The Story of my Baldness” for the stage.)

Back to Kafka who wrote:

“When I was handed over in Hamburg to my first trainer, I soon realized the two possibilities open to me: the zoological garden or the music hall. I did not hesitate. I said to myself: use all your energy to get into the Music Hall. That is the way out. The Zoological Garden is only a new barred cage. If you go there, you’re lost.
And I learned, gentlemen. Alas, one learns when one has to. One learns when one wants a way out. One learns ruthlessly. One supervises oneself with a whip and tears oneself apart at the slightest resistance. My ape nature ran off, head over heels, out of me, so that in the process my first teacher himself almost became an ape and soon had to give up training and be carried off to a mental hospital. Fortunately he was soon discharged again.”

Between the music hall and the zoological garden the choice isn’t that difficult. And of course most of us supervise themselves, with a whip.