I feel bad about my neck

Thoughts on being a woman 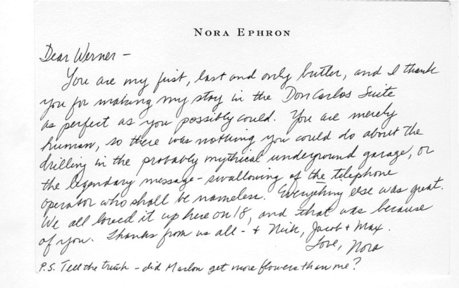 On board Singapore Airlines flight 25 from JFK to Frankfurt I was reading the New Yorker and staring at an ad for Nora Ephron’s book “I feel bad about my neck and other thoughts on being a woman.” For one thing I could not remember who Nora Ephron actually is or was. When it comes to popular culture I often draw a blank. Which doesn’t mean that this never happens with the classics.
But this particular ad had some strange quotations, which I would like to share with you.
“Ephron on what she wishes she’d known: You can order more than one dessert!” Meaning Ephron never understood how restaurants actually work? Ephron was afraid to gain weight but stopped worrying after the Iraq war? And then this: “Ephron on bikinis: Oh, how I regret not having worn a bikini for the entire year I was 26. If anyone young is reading this, go right this minute, put on a bikini and don’t take it off until you’re 34.” A few questions: How old is Ephron now? Is there anybody out there who knows what happened to Ephron when she was 26? Is Ephron suggesting that we should get rid of the bra? Is Ephron a feminist? In my modest opinion she sounds like Steve Martin, but then again when it comes to popular culture I often draw a blank.