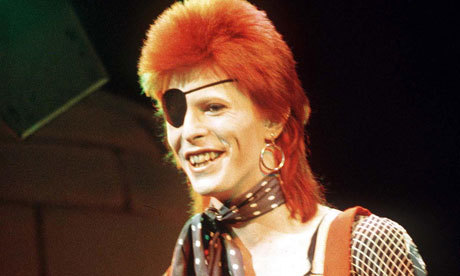 ‘At the height of his success, Bowie created his most famous role, Ziggy Stardust, as a kind of alter ego. In Bowie’s show, Ziggy was a rock-and-roll messiah from outer space who is torn apart in the end by his fans in a brilliant song entitled “Rock ‘n’ Roll Suicide.” The story, which is typically Bowie-esque, is a paranoid druggy science-fiction fantasy. Rolling Stone magazine published a hilarious conversation with William Burroughs in which Bowie tries to explain: “The end comes when the infinites arrive. They really are a black hole, but I’ve made them people because it would be very hard to explain a black hole on stage,” et cetera. The music and the show, however, are among the best things ever done in rock and roll; theater brought back to its ritual origins: the sacrifice of the king.
The problem is that Bowie got carried away a little too far into his private outer space. He began to think he was Ziggy. Quite wisely, he tried to kill him off on stage in London in the summer of 1973, when he announced that there would be no more Ziggy Stardust, and his band, the Spiders from Mars, would be terminated. But Bowie remained haunted by the character: “That fucker would not leave me alone for years.”’

That fucker would not leave me alone for years.
That’s a feeling that many of us will recognize. I began to think that I was Arnon somewhere in the nineties.
I’m still waiting for the self-help book “How To Get Rid Of Yourself Without Dying”.
(Part 2: “The Anorectic Soul” Part 3: Playing Truant in the Milky Way”)