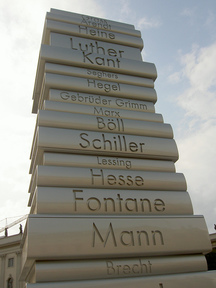 One of my acquaintances alerted me that somewhere in my first novel (Blue Mondays) the main character named Arnon Grunberg stated that Heinrich Heine got on his nerves.
Isn’t it then a bit ironic or hypocritical to use fifteen thousand euro of the Libris Award to subsidize a new translation and publication of a selection of Heine’s poetry and prose, he asked me.
A good question.
Besides the obvious and slightly flippant answer that the main character and its author are not necessarily the same, even if they have the same name, I would argue that a poet who drives you crazy when you are twenty or fifteen, can be appreciated later.

P.S. Excuse me for some small typo’s in the last blogs. The guilt that a single typo causes me can be compared to the guilt a vegetarian feels after eating half a cow.